I have Canadian friends who are perfectly happy with their healthcare. France has the same type of healthcare & my friend's sister was able to get cancer treatment for free. She's now in remission & didn't have to stress out about medical bills.
That said, I don't like the idea of entirely eliminating private health insurance. I believe in France people can have private insurance as well. I do think healthcare should be available for everyone though because there are some people who are too sick to work but don't qualify for disability (or are on a waiting list to be approved which can take several months) so they can't afford care which makes their health worse. People are dying because they can't afford necessary medication.
Honestly, I think looking at insurance to solve the problem is treating the symptoms rather than the disease. They need to tackle big pharma as well as get some regulations in place to stop arbitrary price-gouging from hospitals. The whole "for profit" system for medical is just not working out for sick people. I'm not saying there should be no profit at all, but it shouldn't cost $1,000 to sit in a waiting room at an ER or $8k for a test that only costs a few $. I know I'm beating a dead horse with this, but medical care and medicine should be treated like an essential resource & price-gouging should be banned. There should be a limit on the % of charge over and above what it costs. Especially since many hospitals get all sorts of subsidies for people who can't/don't pay. If they didn't charge such insane prices maybe people would be paying more (sure, some would still refuse to pay, but more would be able to pay).

Ernesto, did you notice that whenever the legal expert the GOP called in started to say something negative about Trump, they immediately shut him down? I did notice that he had the opposite opinions of what he wrote as his opinion about impeachment before-- saying that an actual crime was needed when previously he said it wasn't. It was also hypocritical that he said a president should be impeached for lying about sex but then ignored the fact that Trump lied about having sex, then lied about the hush payments he made to hide the affair, & had his fixer threaten people. Granted, he had the affair before he was in office and didn't it in the oval office with an intern BUT he still lied about it & tried to cover it up.

I knew a guy who lived in the London for a year. He said that medical care was excellent. Everyone had a clinic within a couple blocks. You just walked in and got treated, no questions asked.

It's still better than going in to debt or being refused treatment because you can't pay. I have friends who were denied treatment because they couldn't pay up front. For people who don't want to wait there are other options & they can still pay for treatment but the treatment is not nearly as expensive as it is in the US. Many other countries (UK, Australia, France, etc all have universal health coverage). Brexit is screwing things up for the healthcare system right now though.

I know our hospitals in California can't decline treatment regardless of the ability to pay. The reason it costs so much when going into a hospital is because they are offsetting losses from the illegals. Yeah, maybe not PC, but the truth.
Z

That may be true in California but it's not true for where I live. Yeah, there are a lot of people who don't/can't pay but the hospitals get compensation for it from their insurance & from the government. They sell the debt to a collection agency, write off the loss for government compensation, and are done with it. And they still get more than the treatment actually costs. If the hospitals didn't charge so much to begin with they wouldn't get stiffed as much (because they are absolutely overcharging). There aren't a lot of illegal aliens here, but there are a lot of people who don't make enough $ to afford medical treatment. Even at emergency rooms they will sometimes refuse to treat people (just dismiss them as if they are drug-seeking) when they see they don't have insurance. Over in Texas I had a friend who's daughter got a broken arm while in her father's custody. Rather than take the daughter to the hospital himself, he dumped her back with her mother because he didn't want to pay the medical bills (he could afford it but the mother couldn't). The hospital refused to put a cast on the girl & said the mother would have to pay up front for a specialist somewhere else in order to get it. Another friend had her daughter denied a necessary surgery for her daughter even though she had insurance because she had co-pay & they wanted payment up front. Her daughter spent 2 months in agony while the parents managed to scrape together enough for the payment.
Recently my friend's fiance went to the urgent care clinic. They charged her for the visit (made her pay up front before they would even let her in the door) & then refused to treat her because she didn't have insurance & couldn't afford treatment (but they also wouldn't return the $).

Back in the 70s & 80s INS used to tell their agents to take sick illegals to the hospitals & just drop them off & let them walk in so INS wouldn't have to pay their medical bills. Then they would wait for the people to be released & pick them back up. The hospital staff knew it was happening and were very angry about it so they treated INS agents like garbage.

So, if everyone got free medical treatment, free food, free housing, free internet, free monthly stipend, free transportation, and free phones, why would anyone work at all?

Democrat sore losers just spent $1,000,000 painting an Edsel, knowing all the while it's leaving the paint booth only to be loaded on to a trailer, sent to the wrecking yard to be crushed.
What a waste of time and money.

GOPers spent more on Hillary after 72 months. No convictions. So many trumps buddies going to or in jail.
Putin is your daddy

Went to jail for unrelated stuff..... and it was a sham because of bad apples in the FBI and elsewhere. What would have happened if Trump deleted thousands of emails and bleached his phone and computer during an investigation?

Did that get repeated so many times that some people actually believe it..... you know the results of the Muller report? You see the IG report?
Wait till the AG is done with it.

I bet some idiots in government voted to fund this. Third graders are smarter.
https://news.energysage.com/solar-roadways-what-you-need-to-know/

He appoints crooks. He is a crook. FBI should investigate anyone running for political office who asks foreign governments for help in our elections. " Russia, if your listening, find dirt on my opponet."

Be careful what you say Mr Nadler.
https://www.nbcnews.com/politics/trump-impeachment-inquiry/flashback-what-nadler-said-about-impeaching-president-1998-n1095141

I never realized someone could get permanently delusional after drinking that dem kool aid. 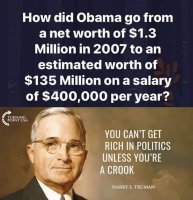 When Truman went home after he left office, he had trouble paying utility bills. Congress voted him a small pension so he could survive. He lived the rest of his life in the home he had when elected. His wife and daughter did all the housework.

I heard about 50 percent of reps and senators are in the one percent group.

highup said:
Be careful what you say Mr Nadler.
https://www.nbcnews.com/politics/trump-impeachment-inquiry/flashback-what-nadler-said-about-impeaching-president-1998-n1095141
Click to expand...

..and Pelosi said virtually the same thing not very long ago. Now she wants to control the Senate end of the process.